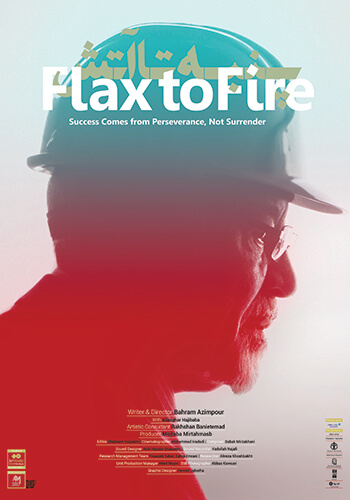 Success does not come from Surrendering; Success comes from Perseverance

The eventful life of a quiltmaker who grows up to establish the foundry industry in Iran.

The documentary Flax to Fire depicts the life and work of Aliasghar Hajibaba, an elite Iranian industrialist and entrepreneur. Originally trained as a quiltmaker in his youth, he manages to start an independent business in the midst of a tumultuous life. With the help of his family, he successfully pursues his endeavors to the point that he eventually becomes known as a founder of Iran’s iron alloys and foundry industry. This film bears witness to Hajibaba’s incessant work ethic throughout his long life. He and his associates also discuss the political struggles, economic problems and social barriers of their times.

With presence by: Aliasghar Hajibaba

Whenever I start a new film, I try to find a way to remove or at least minimize the distance between the subject and myself. I focus on the ever-present questions of where the film starts and what it intends to say. Due to the multiple angles and varied aspects of Hajibaba’s life, the choice of structure, content, and narrative line were extremely difficult. Ultimately I decided to follow the common chronological format of the Karestan series. I decided to categorize and present the narrative in three parts: his industry on a national macro-economic level, his family’s micro economy, and his socio-political activities. I have tried my best to convey all three aspects to the audience without deviating from his entrepreneurship as the central focus (in keeping with the main thrust of the Karestan project).

Perhaps documentary films allow us to observe how strong an influence the subject can have on the artist. Hajibaba’s distinctive salient characteristics, revealed over the course of filming, left an indelible impression on our team members. His national perspective, his professional audacity, his exemplary organizational acumen, and his philanthropic attitudes constitute achievements that far surpass conventional work experiences. We followed and documented the undertakings of this modern day giant who never yielded to the hardships of industry. His story is one of intense agony, multiple failures, and yet impressive victories. Hajibaba is an admirable human being who, in the course of his tumultuous life, went from flax to fire, and it has been a privilege for us to follow his great journey.