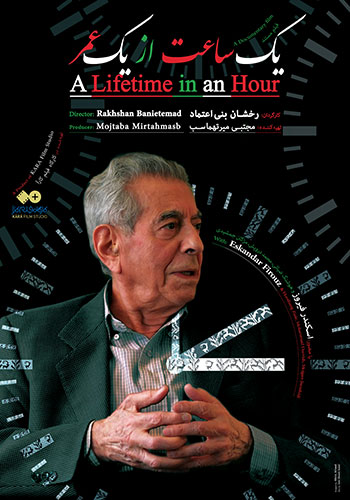 A Life Time in an Hour

"Eskandar Firouz," the founder of the Department of Environment is known as Iran's father of the environment.

A few-hours-long meeting and conversation by three environmental activists with him is an oral history and a quick look at a lifetime of experience and patriotic concerns of "Eskandar Firouz."

Back in 2014, I decided to make a film about the environment and the air pollution crisis in Tehran. I began to carry out the research on these issues together with a number of my colleagues and environmental activists. Halfway through the project, the organization that had believed more than us in the necessity of such an undertaking, and had promised to provide financial backing for the project, forgot its commitment, lost all contact with us and disappeared from view.

During the research phase of the project, and by necessity, parts of the film that concerned two lasting figures in the field of environment had been shot: conversations with Eskandar Firouz, founder of the Department of Environment, and Mahlagha Mallah, the evergreen lady in the realm of environment.

With the project coming to a halt, we were left with a certain volume of precious words and pictures from these two distinguished people. These were clearly not sufficient for making the film that we had intended, but they were of such importance that could not be ignored or be confined to the archives. In the case of Eskandar Firouz, we started shooting when we were almost certain the original film was not going to be made and had thus lowered our visual benchmark to the level of oral-pictorial history, since his influence on creating a culture of environmental awareness in our country has been significant enough to make even the record of an hours-long sitting with him a treasure for his contemporaries as well as for the future generations.

Although the original film was not made, the pre-production work that we did for the two documentaries was nothing short of what we would have done for the unmade film. Mojtaba Mirtahmasb and a professional crew stayed committed to complete the project, and Reza Kazemi Dinan helped us out.

Though these two films may not stand out in my body of work, they are among the films from whose completion and screening has made me very proud and happy. I was elated on the day when Mahlagha Mallah buried her face in the monitor of her computer so that with her failing sight could revive the memories of years of hard work and struggle; every now and then taking a deep breath of satisfaction. And on another day when Eskandar Firouz stood in the House of Cinema, after the unveiling of the film, taking in the long applause of the audience with tears in his eyes, forgetting for a few moments the ingratitude with which he had been treated.

And now that I think of the outcome of the work, I could not have wished for more satisfaction from making these two films!