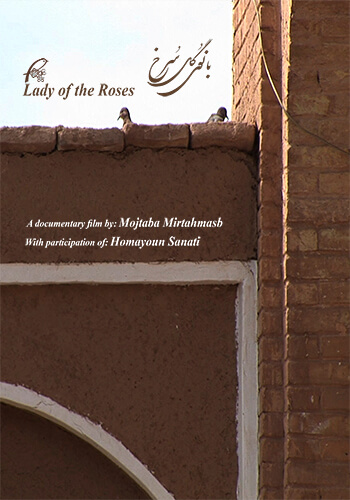 Lady of the Roses

“Lady of the Roses” is the name given to late “Shahindokht Sanati”, a lady who went to Lalehzaar region of Kerman before the Islamic revolution, and replaced poppies with roses and opium with rosewater, and took this so far as transforming the agricultural destiny of a whole region.

The story is told by “Homayoun Sanati,” Shahindokht’s spouse and three years after her death. He’s the founder of “Franklin Publishing,” “Offset printing house,” “Pars Paper Co.,” etc. and who, as a whole, is considered as one of the rare figure in Iran’s culture, industry and management.

With participation of: Homayoun Sanati

In the Absence of: Shahindokht Sarlati

The name “Sanati” in Persian language literally means “industrial.” I have treated this a little playfully here.

I, too, finally made an “Industrial” film

Years ago, it would be against my artistic values to make an “industrial” film! And in the years that followed, when financial need forced me to do so, it was beyond my abilities; for making this kind, too, requires know-how.

Seyyed Abbas Sayahi (the poet in the film “Gabbeh”) pointed out to me that “Homayoun Sanati was one of the five exceptional individuals of the past one hundred years in Iran, and one of the ten influential figures of the 20th Century in the world.” And I, who come from Kerman and who knew both Homayoun and his wife Shahindokht, knew this too well.

But I never knew how difficult it would be to get Homayoun to appear before the camera, since he was in principle against cinema, and would always advise me to look for a more respectable occupation! He would say this to me with the support of his own historical and world-view arguments, and it had gradually gotten into me that cinema was no longer the whole truth and that it was further away from reality than I had known!

And the key to bringing Homayoun to appear before the camera was the late Shahindokht. And it was in her name and memory that Homayoun sat down in front of my camera to talk of Shahindokht and to tell of her concomitance and empathy in all those years for the setting up and management of so many lasting deeds.

And after the film was made, I knew that what I had done wasn’t in vain in the face of what the couple had done; for I had managed to multiply the image of their determination and vigor by the number of those who have or will see it. And this is the reason why documentary cinema is there.

The whole period of time that the film was being made was an educational class to teach me that there still are people in the world in whose honor one can lift his hat and proudly say that I, too, am an Iranian like them who love this land and who will build up this land by love; by industry!

It is now a long time since the film has been made, but the never-ending dynamism of Homayoun and Shahindokht is still in me. Whenever I somehow lose hope in the conditions of the times, I sit down and watch “Lady of the Roses” and let its vitality to penetrate in me once again. You should see it, too.

At the time I was writing the above note on the film “Lady of the Roses,” Homayoun Sanati was living. He still is.